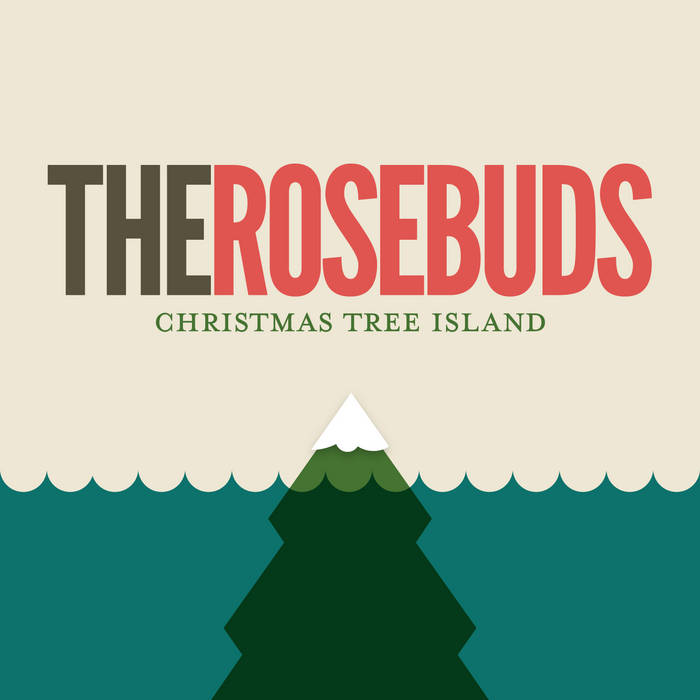 Christmas Tree Island is a place where all Christmas stories go to be bathed in sunshine and to remember themselves as happy.

In between releasing several studio albums on Merge Records, Ivan Howard and Kelly Crisp love Christmas songs so much that for several years, they’ve tinkered with different ways to celebrate this tricky medium. First it was putting together a compilation of songs from young artists in their own community and making these available at the local record shop. There were no real rules to being on the compilation, but surprisingly, most artists submitted wildly original, brave songs. In the years of perpetual releases by pop stars savaging once-poignant 50s Christmas classics, this compilation was evidence that musicians still had new things to say.

This grew into even more projects. The Rosebuds began contributing holiday music to various releases to benefit children’s charities, friend and family albums and concerts, and had the joy of seeing their music appear in Christmas-themed television shows, which communicated back to the band that this music had a popular context and could be explored further.

They continue promoting the idea that the spirit of the medium is alive and well, treating it as more than a novelty, as its own genre with traditions and characteristics that are strong and rich in history and meaning, even if they were not studied in academia. With its specific chords, melodies and sounds evoking feelings of magic and warm nostalgia, it invites you in, to share them, even if you weren't fortunate enough to experience those sentiments in the first place. But you know that feeling, everyone does. It's there already. You see, Christmas music is more than just changing the lyrics to a non-holiday themed song. It's about creating a world of its own specifically for the Holiday and capturing those feelings for a moment. Everyone knows a great Christmas song within the first few seconds of hearing it.

In this collection of all new, original songs, The Rosebuds explore some classic holiday themes, and try to find that natural nostalgia for a time of year that, though weighty with stressful situations, is a time to give ourselves permission to remember kinship and togetherness the way it makes sense for each of us. The nostalgia in these songs, then, is for once relate-able.